2019 is set to be the toughest year yet for the long-running White Rose Classic. The Hawes Long Route is 120 miles long, featuring 6 “named” climbs with a total elevation gain of over 10,000 feet. Anyone planning on tackling this considerable challenge needs to be prepared, not just for the hills we have given names to, but all those in between as well. With this in mind, we asked some advice from Andy Cunningham – ICC member, nationally-rated hill climb specialist, and fastest male time around the Etape du Loch Ness for two years running – about how he plans to tackle the peaks and troughs of this year’s White Rose Classic.

“On paper, all the climbs are hard individually, but just how tough they are on the day depends on where on the route they are… all the miles and ascent you already have in your legs. For me, Albert Hill, just a half mile out of Settle and at around 17%, is the hardest climb of the day. The Medium Route gets there after 2 big climbs and innumerable small ones – and Every year I do it, I see people cramping on the way up.” 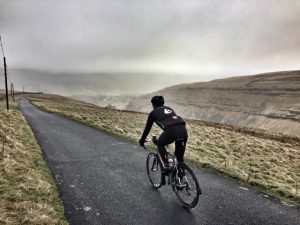 “I take it in two halves, that first half mile is the hardest segment of the day after all the riding you’ve already done. Take care not to burn out. There’s a drinks and snack station this year in Settle, so stop there and make sure you get the fluids into you before Albert Hill. Remember, if you are doing the Hawes Long Route, you already have Norwood Edge, Fleet Moss, Coal Road and Deepdale/Kingsdale in your legs. And it rolls, doesn’t it, from Airton back to Ilkley, with the final named climb, Langbar, just before the finish.”

When can you finally stop conserving energy and put the power down?

“The place to give it everything you have left – to really give it your all is Langbar. You know once you get to there that your day is in the bag. It’s really a rewarding drop down to the finish. So don’t burn too many matches on the climb out of Settle, save something for Langbar and make a big finish.”

“You just don’t think of it as tiring when you look at the profile, but the rise up to Greenhow after Norwood will sap your energy. It’s not a named climb, but Greenhow is almost 8 miles of constant climbing, often against the wind. And the road coming out of Airton is rolling all the way over to Wharfedale with more of the same as you head down the Valley. The climb out of Burnsall is also a nasty surprise.”

“But even the named climbs can be deceiving. Look at Langbar – on paper it’s one of the smaller climbs of the day, but I’ve ridden up it after 10 or 100 miles, it is always hard. There’s a climb before the climb, then a little downhill – the guys who don’t know it may think that’s it, but they still have the climb to come. Events and sportives highlight the big climbs, but you really have to factor in the ‘little’ hills in between!”

What about the elements?

“The wind plays a massive role. The prevailing wind direction is westerly, most of the climbs go against that. That Westerly makes it quite whippy on the descent of Fleet Moss, it can get wobbly with a strong westerly blowing. It rains here. A lot. Its not like riding in Mallorca or doing the Etape de Tour, where the roads are dry and it doesn’t rain all that often. The roads become slick. Local riders are used to it but if it’s bad weather, it’s a hard man’s day out.”

“You might not have much choice, but the climb out of Halton Gill is a classic, ‘not as bad as it looks’ climb. Valley road leading up to it is quite flat, but usually against the wind. Over the top of the climb, you’re into the wind. So go as slow as you like up that climb and save your legs for the climb out of Settle. Warning: worst placed cattle grid in Yorkshire!”

I look for the reward at the end of the climb. Aside from the downhill into Ilkley after Langbar to the finish, the climb out of Settle delivers a great reward: a fast, mostly open descent, often with the wind, into into Airton. I rode the Fred Whitton in the Lakes and there is just no reward. It’s steep and technical up, and it’s steep and technical down. You have to keep your wits about you for the duration. With the White Rose you get a nice reward for most of the climbs.”